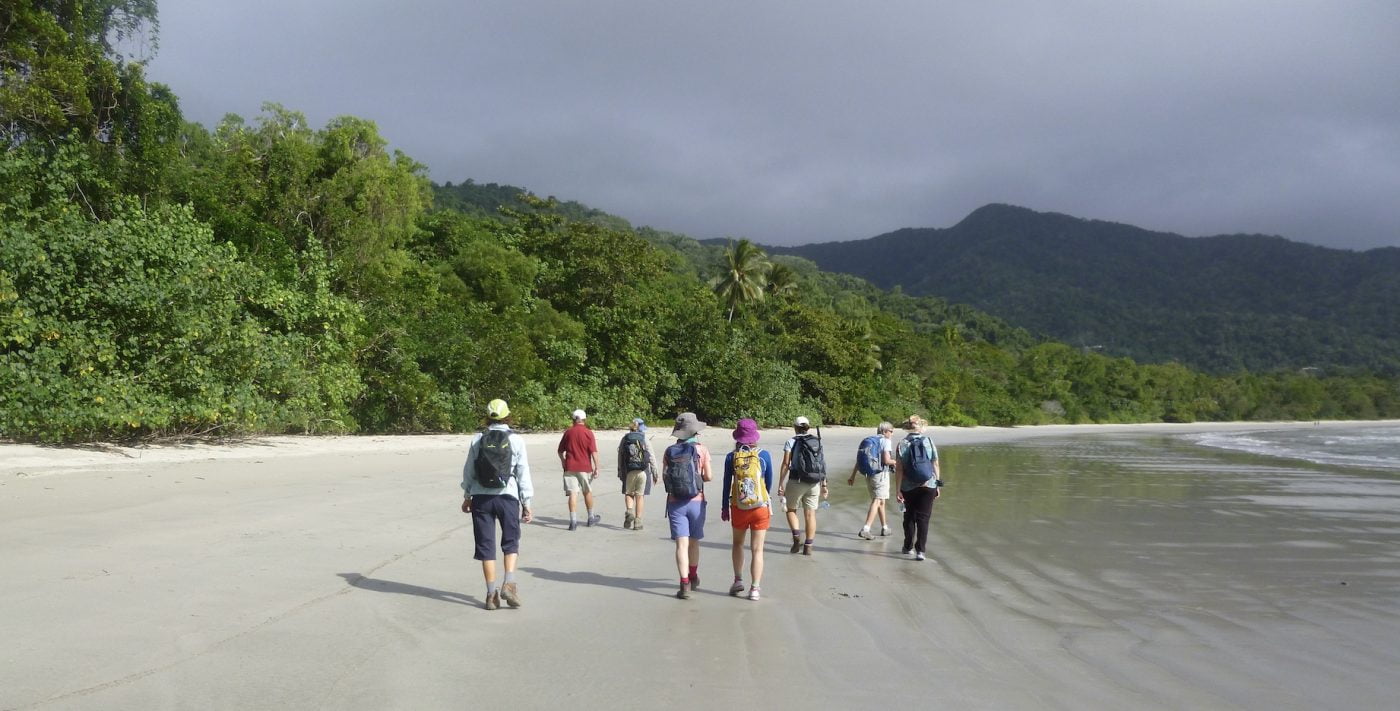 Depending on where you are in Australia winter can bring anything from punishing cold, to relief from the punishing heat. And while there are plenty of cold walks you can do, we’re going to focus our gaze further north for now.

Looking at the wonderful walks you can do at any time of year, really, however if you’d prefer not to drink ten gallons of water a day, then winter is just perfect.

Before we do so, however, know that walking in the cold can actually be good for your health. With one study* showing you’ll burn 34% more calories walking in the cold, than you would in milder conditions. So don’t let the cold put you off at the weekends. Get out for a walk, burn off those calories, then head north and go somewhere a touch more exotic…

Visiting Kakadu has got to be on the bucket list for every Australian, and it doesn’t disappoint. A National Park about half the size of Switzerland, where Crocodiles still rule and the wildlife couldn’t care less if we’re there or not.

Some of the most incredible rock art in the world, and a history of Aboriginal activity going back over 65,000 years.

The rocks that create the landscape here are 3 billion years old, only 1.5 billion years younger than Earth itself. There aren’t many places on the planet where rocks of this age actually protrude out of the ground. Kakadu really has an embarrassment of riches on the natural wonders front.

And walking around all that is only one part of a trip to the top end. You’ve also got Nitmiluk National Park, with Katherine Gorge one of thirteen that cut their way through the ancient sandstone. Once again full of Crocodiles, but freshwater this time so not quite so terrifying.

Litchfield National Park is a must when you’re up there too, as is a dip in the thermal hot pools at Mataranka, or Bitter Springs, and that’s probably enough. Finish off with a few days in Darwin, and you’ll be ready to come back to the real world again.

Right in the middle of Australia, heading east from Alice Springs is a 223km walk into an otherworldly wilderness. Following the West MacDonnell Ranges, sometimes on the actual mountain ridges you’ll eventually arrive at Mount Sonder, one of the Northern territories highest.

In summer it would be almost impossible, as it rains so much and the average temperature in January, for example, is 36C degrees. But if you go in June it falls to 20C, making it a much more pleasant experience.

You’ll still be walking through the same dramatic landscape the puts your life into perspective though. Feeling diminutive as you wind along a three metre track at the bottom of Stanley Chasm’s 80 metres walls.

And you’re still surrounded by wildlife that you’re hard pushed to find anywhere else.

Like the endangered Black-flanked Rock Wallaby, an Earless Dragon or a Perentie – Australia’s largest lizard and quite a sight when rearing up on its back feet.

Tick off Serpentine Gorge and Ormiston pound, and your trip is complete. 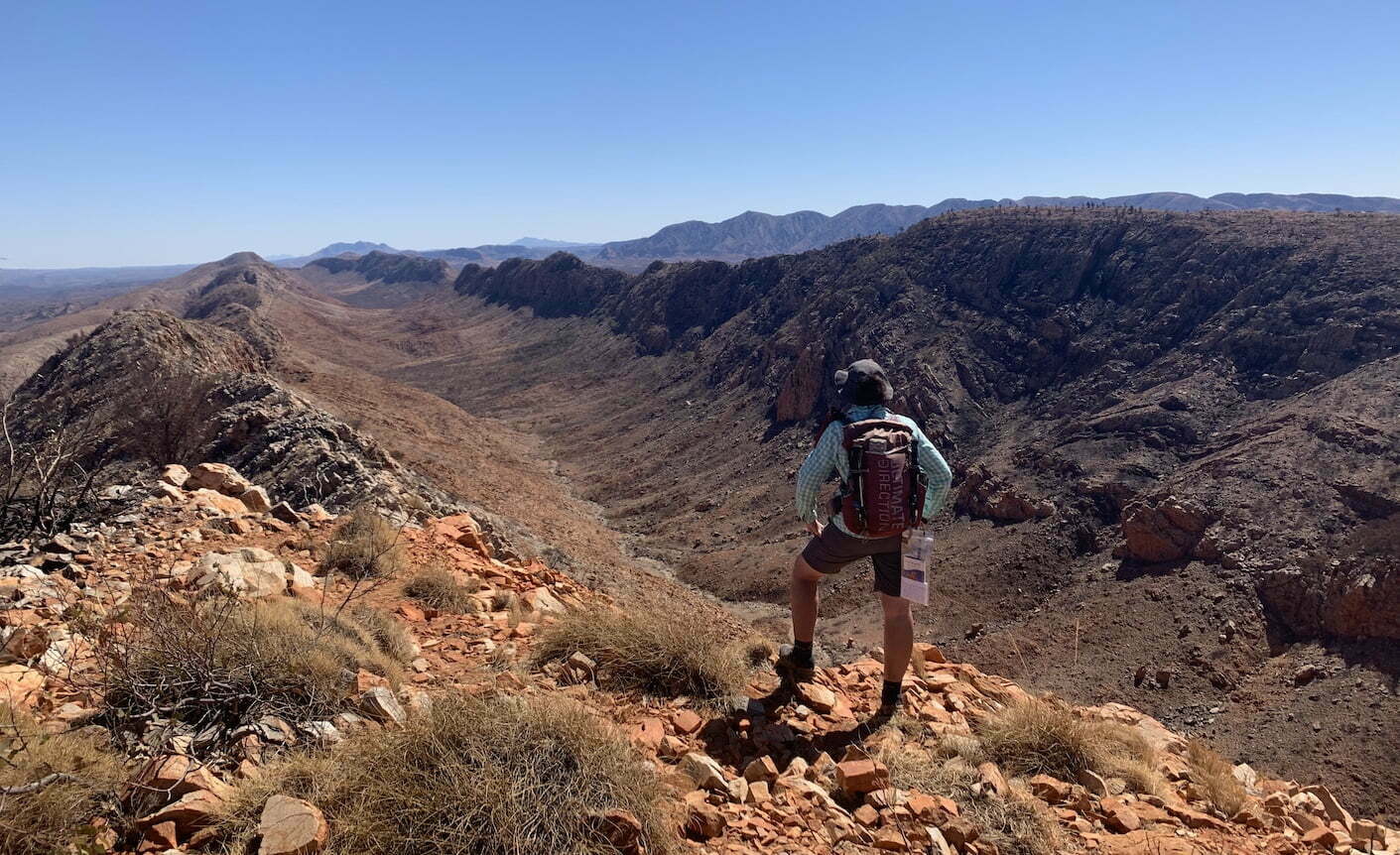 Counts Point on the Larapinta Trail

Making the pilgrimage to the centre of Australia and laying your eyes (but not feet) on the incredible Uluru, has got to be another bucket list item for many an Aussie.

Watching the enormous sandstone monolith turn red, orange & gold at sunset. Walking round the base to discover a Thorny Devil lizard hiding in a gully, or step carefully away from a Mulga Snake, which has the largest venom output of any snake in the world.

Despite the fact that you’re in the middle of the desert there are plumes of green surrounding the odd waterhole, creating little micro climates to enjoy, while other parts
of the walk leave you exposed to the elements, with a towering wall on one side and the never ending space on the other.

Now that you’re suitably awestruck, move on to see Kata Tjuta, also known as the Olgas, and prepare to be blown away once again as you walk the Valley of the Winds Trail.

You’ll serpentine in between the 36 weathered domes that erupt from the ground, and along the way you’ll rest, and peer from two wonderful lookouts. Trying to gain perspective on the 20 km spread of the ‘Many Heads’ – translation of Kata Tjuta.

Now, do you have time for the Kings Canyon, the glorious Watarrka loop…? Of course you do… walk the rim and look across to see the striation marks, layers of sandstone and shale going back hundreds of millions of years, before plunging down into the Garden of Eden.
A watering hole surrounded by lush, and rare vegetation. Go for a swim if you dare…

If you’d rather avoid the red dust, then the Daintree Rainforest could be the very thing. There’s a lot less rain over winter for a start, less humidity and a lot less sweat pouring down your back as you venture into this incredible World Heritage Site.

Exploring Barron & Mossman Gorge you’ll be enveloped into the mass of tangled vines, triumphant eucalypts with enormous fortressed roots trying to reclaim the little space created for your path. Everything here is trying to eat everything else, it seems, and you’ll
be touched by the enduring, relentless life of the place.

Venture over to Cape Tribulation and you’re even further away from civilisation, delving deeper into the oldest rainforest on earth. The Great Barrier Reef comes very close to the shore here, making it the only place on earth where two World Heritage Sites actually touch. Keep an eye out for Cassowary birds too. Enormous yet elusive, and surely related to Velociraptors…

While you’re here you might as well check out the Atherton Tablelands. Full of dramatic cliffs and some of the highest waterfalls in the country, along with a visit to Cathedral Fig Tree, which simply has to be seen to be believed.

Time for a rest at Mission Beach after all that..?

Away from the coast and well into outback territory, Carnarvon Gorge is another wintertime wonderland. Eight hours north west of Brisbane, or a short flight if you prefer, it’s about 30km in length, but with lots of little tributaries heading off to the sides providing enough for three or four days’ worth of exploring.

Six hundred metres deep at some points, you’ll feel well into ‘Land That Time Forgot’ territory as you wind your way through squeezes a metre wide, and listen to the quiet, consistent trickle of spring water. Perfectly filtered and so clear you could probably bottle it, and sell it for $10 a litre. Although we’d strongly advise against it, of course..

There’s aboriginal rock art, unique plants and wildlife and an overall sense of awe around every sweep of the towering sandstone walls. Be sure to check out the Amphitheatre, Boowinda Creek, Cathedral Cave, Balloon Cave, Ward Canyon, Moss Garden, in fact, just check it all out while you’re there. You won’t regret it… 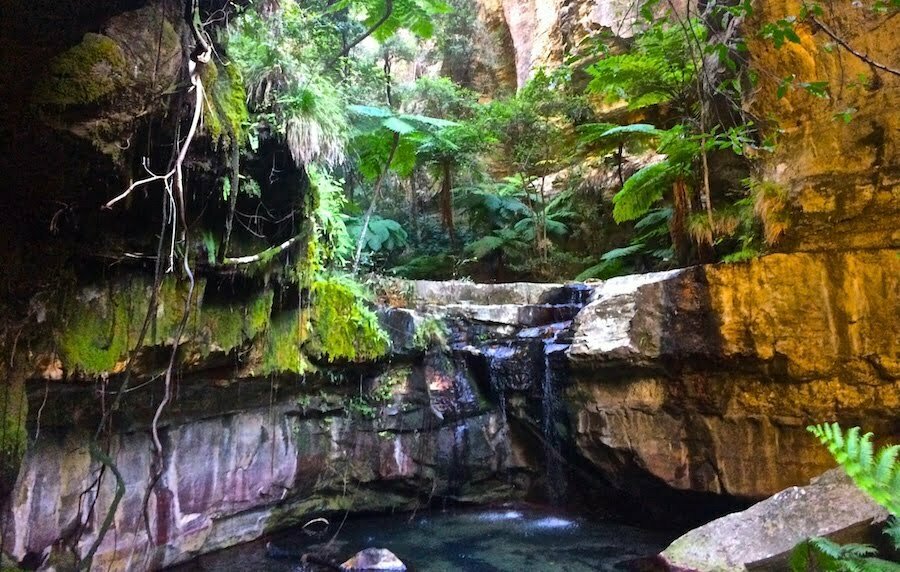 Who doesn’t want to go, one day, to the Flinders Ranges. Especially someone who’s read this far down the page. One look at an aerial photograph of the majestic Wilpena Pound, and that’s all you need.

Not the remains of an enormous volcano, as it was once thought but instead – actually the remains of a mountain that was higher than Everest in its day. A walk round this true outback location is one to remember, and also takes in St Mary’s Peak, the highest mountain in South Australia.

In the centre of this naturally created amphitheatre, should you venture down, you’ll also discover the famous Cazneaux’s Tree. An enormous Red Gum, standing alone surrounded by miles of dry and barren land, and photographed by Harold Cazneaux in 1937.

“This giant gum tree stands in solitary grandeur on a lonely plateau in the arid Flinders Ranges, South Australia, where it has grown up from a sapling through the years, and long before the shade from its giant limbs ever gave shelter from heat to white men….

… One day, when the sun shone hot and strong, I stood before this giant in silent wonder and admiration. The hot wind stirred its leafy boughs, and some of the living elements of this tree passed to me in understanding and friendliness expressing The Spirit of Australia.”

Any good trip to the Flinders Ranges should take in Rawnsley Bluff, Bridal Gap, Tanderra Saddle & Dutchmans Stern. Also Bunyeroo Gorge, Black Gap & Alligator Gorge. Every single one of them as interesting as their names would suggest. 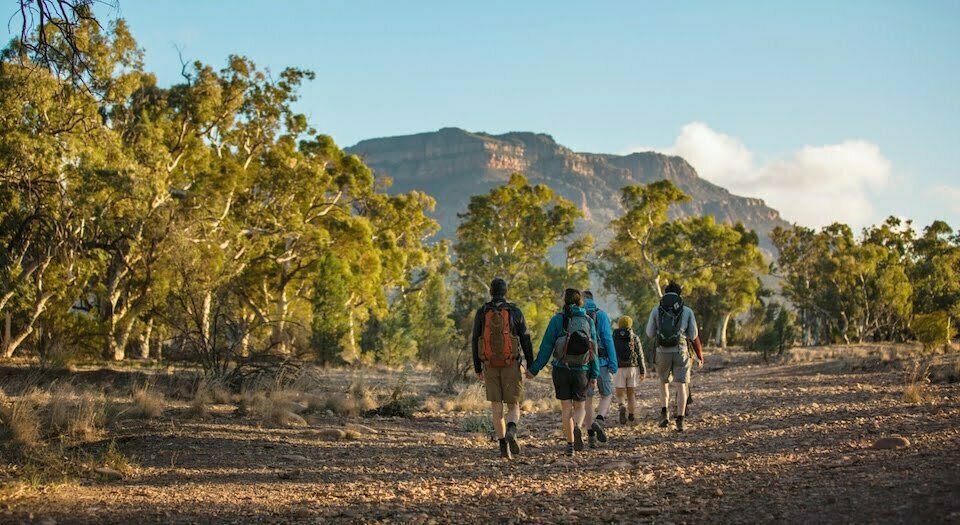 What are you waiting for…? Where will you go…?
Give us a call if you can’t make up your mind…

Best walks on the Three Capes & the Tasman Peninsula 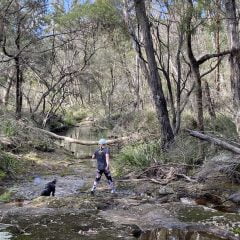 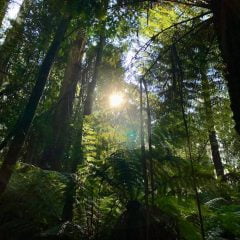 Best walks on the Three Capes & the Tasman Peninsula