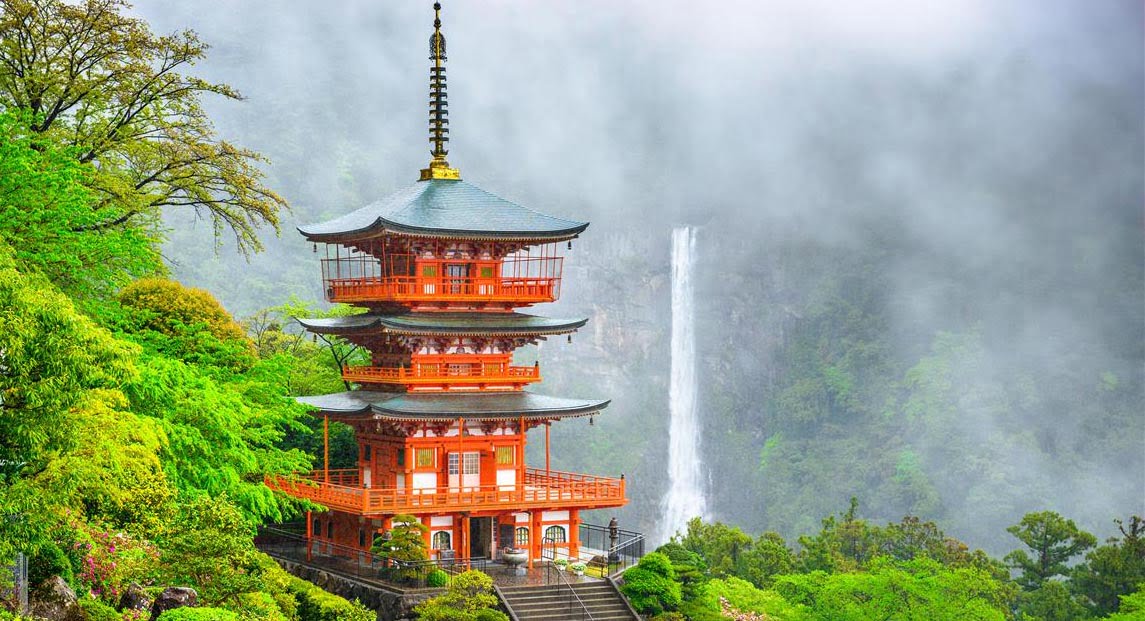 If you travel a couple of hours south of Osaka (only Japan’s second largest city with a mere 19 million people) you’ll eventually come to the bottom of the mountainous Kii Peninsula, and you’ll find a beautiful area of the country called Kumano.

Well, that’s what it’s called now, however in Japanese mythology and the native Shinto religion – it used to be called Yomi-no-kuni, which translates to the Land of the Dead or The World of Darkness.

Don’t let that put you off though. If you are prepared to go exploring, and ask for guidance, eventually you’ll find, tucked away amongst the towering cedar forests next to stunning waterfalls and rivers, the three Grand Shrines of Kumano.

Nestled into the landscape about 30 kilometres away from each other, these are the shrines that pilgrims have been visiting for over a thousand years, and the tracks that lead you there – and between them – are The Kumano Kodo. Before you even get there you can tell it’s a special part of the world. For a start, it’s a UNESCO World Heritage site and it’s twinned with the Camino de Santiago walk in Spain. In fact you can actually pick up a little passport to get stamped along the way (and when you complete the El Camino) pleasingly anointing you with the title of ‘dual pilgrim.’

It’s also been visited by people looking to worship nature and enjoy the healing properties of the various hot springs, before the shrines were even there.

In fact it’s nature worship that evolved into the Japanese Shinto religion. Shinto ‘spirits’, or ‘kami’ take the form of natural elements such as wind, rain, mountains, trees, rivers and fertility, and the shrines were built over time to represent this.

So, you’ve got a mountainous area that’s infused with Japanese tradition, covered in cedar trees and cherry blossoms, layered with rice paddy’s and dotted all over with waterfalls, hot springs, tiny villages and miniature Oji shrines.

And then, in the 6th Century Buddhism arrives and the area becomes a site of ascetic training. Eventually the Shinto spirits, or ‘kami’, are believed to be emanations of Buddha, and the three sites began to be worshiped as one – called the Kumano Sanzo.

So now you have an area of pilgrimage for the country’s two main religions, that happily co-exist, located in a place where people have worshiped nature for long before history was even recorded.

Add to that, the fact that you’re literally walking in the footsteps of ancient Samurai and Imperial families, who all used to follow the pilgrim trails to Kumano, and it’s a no brainer. If you’re visiting Japan and you like to walk, it’s a must. There are three recognised routes to the Kumano Sanzo shrines, but the Nakahechi Route, established by Japan’s Imperial ancestors, is the most popular.

It originally began in Kyoto. Pilgrims took a boat down the river to Osaka and then travelled overland to Tanabe on the west coast. This is where the route for modern pilgrims now starts. A small Oji shrine marks the entrance to the Kumano region, and you’re off into the mountains.

Striking off towards the Hongu shrine to begin with, you’ll stop along the way and overnight in traditional ‘ryokan’s, and be served ‘kaiseki’ meals, which are a wide variety of small dishes such as vegetables, Kobe beef, chicken, fish, vegetables and sashimi.

Your overnight accommodation, sleeping on futons and being served these delicious meals really helps immerse you into the culture as well as the environment when walking the Kumano, and is a wonderful part of the experience. The first shrine you’ll arrive at is the Kumano Hongu Taisha, sitting on a ridge surrounded by giant cypress and cedar trees. The entrance to the area is marked by the largest Torii shrine gate in the world, which represents the separation of the secular and spiritual realms, and a long stone staircase will take you up to the shrine itself.

Green light filters through the forest canopy as you complete the climb, and you’re into the clearing of the pavilions.

Relax, enjoy, and worship whatever feels sacred to you. The open and accepting nature of this place is one of the lovely things about it. In fact, Kumano pilgrim etiquette officially asks that you respect the faith of past and present worshipers, and that you greet others with a smile and a warm heart. A lesson for all of us right there. Your overnight stay when visiting Hongu is likely to be Yumonine Oshen, the location of a hot spring that also happens to be World Heritage site all of its own. And the story behind it nicely encapsulates the acceptance of nature, worship and the blend of religions.

Discovered over 1,800 years ago, the restorative nature of the springs was a draw before religion was part of the picture.

Then, when the Hongo shrine was built, Shinto pilgrims would perform purification rights in the springs to ward off evil spirits. According to Shinto beliefs, you see, we’re all inherently good, evil is caused by external spirits, and they can be warded off by rituals, prayers and offerings.

Now Buddhism comes along, and the legend says the hot springs began streaming out of a stone statue of Yakushi Nyorai, who happens to be the Buddha of Healing and Medicine. When you visit you can see a hole in the Yakushi statue which takes pride of place at the Toko-ji Temple.

Three belief systems happily co-existing, in a beautiful natural setting with undisputed health benefits. That pretty much sums up the Kumono Kodo, and this area of the world is full of stories like that.

Each of the other two shrines, the Kumano Hayatama Taisha, and the Kumano Nachi Taisha, have their own unique character and story. But we’re not going to get into that here, you’ll just have to go and find out.

Two highlights we have to mention though.

The setting for the Kumano Nachi Taisha shrine is, quite simply, other worldly. The traditional red temple siting resplendent against the green backdrop of the forest, on the edge of a chasm stretching over to the longest waterfall in Japan, plunging 133 feet into the hidden depths. Movie location scouts take note.

And another view worth writing home about – or instagraming at least (!) – is roughly three hours walk on from Hongu Taisha, where you reach a little Buddhist statue on top of the Hyakken-gura pass.

The backdrop provides a panorama of, so they say, the 3600 peaks of Kumano, give or take a couple. But if you go, you can let us know what you think. If you visit in March & April it’s cherry blossom season, and if you go in October & November the leaves are all changing colours – however any time of year is a good time to go.

And compared to other walks you might have done in the past, it’s pretty quiet most of the time. You can walk for a whole day without seeing another person.

One last word before you pack your bags. Although Kumano was known as the Land of the Dead, Yomi-no-kuni is not a fire and brimstone kind of place, it’s simply an underworld where you go when you die, regardless of how you behaved when you were alive.

So the message, according to some, is that ‘while you’re alive, it’s important to you do your best in everything, while having fun and sometimes reflecting on yourself.’

Something to think about as you wander.